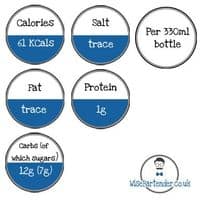 Big Drops Pale Ale, but with an extra Citra hop twist! This Special Edition brew from the award-winning Big Drop Brewing Co contains four hop varieties and not only brings the usual large fruit juice aromas of lime and grapefruit, but with an extra dash of bright orange, mango and lychee to give a smoother after-taste.

How is this low sugar and what about the carbs?
As defined by governmental guidelines ow sugar means the drink contains less than 2.5g of sugar per 100mls. Products with a higher sugar content cause a spike in insulin and we react by storing more carbs as fat. You may also notice that although lower in sugar there is some carbs, this is usually more complex forms of sugar such as starches and fibre and the body uses these for energy.