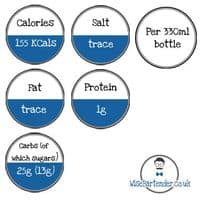 Big Drops Pale Ale, but with an extra Citra hop twist! This Special Edition brew from the award-winning Big Drop Brewing Co contains four hop varieties and not only brings the usual large fruit juice aromas of lime and grapefruit, but with an extra dash of bright orange, mango and lychee to give a smoother after-taste.